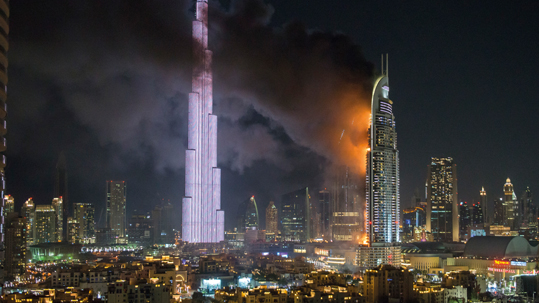 Posted at 16:31h in Features by FME Magazine
Share

The “High-rise” or “Skyscraper” is not, as some would believe, a modern invention. They have been around since the height of the Roman Empire and were built more out of necessity than aesthetics. When you have a large population that require to be housed in a relatively small area then there are only two ways to go – and we do not seem to like to go downwards! Here Toby Hayward, International Health & Safety expert, attempts to examine the past events that have shaped the fire industry approach to safety in high-rises as well as to try and outline some of the continued challenges which remain.

Today high-rise buildings can be seen both as a necessity, a sign of power or of wealth, or as an attraction in their own right. They have grown in height dramatically over their “invention”, firstly due to the creation of the elevator, which meant it was easier for tenants to access their apartments, followed by the invention of steel framed construction with reinforced concrete, which continue to drive them further skyward today – often piercing the clouds in an effort to scrape the skies

Now I am not sure about you but the highest I have ever lived was the fifteenth floor. I loved the view and my children did too. My then wife on the other hand was not so comfortable. “What happens when things go wrong?” she would ask. Now being the true HS chap that I am I would lay out the evacuation routine and even have a map printed on the back of my apartment door. However, she still did not feel comfortable.

We continue to need these buildings for mass accommodation in our growing cities worldwide. This, coupled with the penchant for profits and exclusivity amongst developers, means that our skyscrapers are not going away any time soon.

Our history of fire issues in this type of structure begins very near their inception. Within both Rome itself as well as in other cities under Roman rule some buildings reached ten or more storeys. Emperor Augustus (30bc – 14 AD) tried to set limits of building height to approximately 20.7 metres but ultimately failed.

Following the Great Fire of Rome Emperor Nero had more success and reduced the height down to approximately 17.75 metres, citing the dangers of fire and collapse of any structure higher than this. Insula, or “island”, as high-rise buildings were called at the time, housed all societal spectrums. Hence, the fire, which devastated Rome in the year 64 AD and lasted six days, was the spark (so to speak) required for this reformation.

Before we move from the Ancient into the Modern we should also mention that the earliest organised firefighting brigade on record was formed in Rome by Marcus Licinus Crassus. It was 500 strong – which would rush to a burning building at the first cry of alarm. One major difference however, is that they would do nothing until Crassus had bargained an appropriate price with the owner of the burning property! Not something we would condone today.

As cities grew and technology such as reinforced concrete and steel girder construction became available then the heights of these towers increased.

The history of fires in these increasing high structures is tragic. From the fires during the 1906 San Francisco that decimated the Central Tower and Old Chronicle Building, the 1974 fire in the Joelma Building in San Paulo, Brazil, that took the life of over 170 people all the way through to Grenfell Tower in London in 2017.

The above represent a small sample of the fires that have occurred in these structures globally but they do share common risk profiles.

The risks usually include the following:

Let’s look at each of these elements in turn.

Time is of the essence when it comes to any emergency response. However, to be able to pin-down and confirm the actual location of the fire can take between 15-20 minutes, even with the fire elevator operational. Because of this delay in getting verification there is an obvious knock-on effect of getting fire teams and equipment to an upper floor and the team can expect an advanced fire on arrival.

This is certainly the case with any fault with sprinkler and HVAC shut off systems.

The rapid spread of fire and smoke is due to one particular factor, known as the “chimney/stack effect”. Heat rises, and in a fire situation, this means convection causes heat and smoke to directly affect the floors above. Raising the temperature of the associated materials beyond that required to combust and spreading smoke through the interior and exterior of the building.

As to the environment, challenging can be an understatement. Firstly, in a low rise, fires tend to vent through any gap within the compartment. Due to the design of a high-rise often the only venting is through the entrance to the compartment used by the fire team. Obviously this can be overcome by running a suitable hoseline to protect the firefighters.

Window failure and the consequent entry of wind, further exacerbating the stack effect and also pushes the fire towards the interior hallways and consequently the fire teams! Ensuring that fire teams direct their hoses towards walls and ceilings rather than windows can assist in reducing this risk as windows can react to both the pressure and the thermal shock.

Evacuation is key. For many years fire brigades around the world have preferred to rely on the principle “stay put” for non-affected spaces in high-rises. Relying on compartmentalisation, sprinkler effectiveness and focused firefighting to control these events. I will not proffer an opinion on this protocol here but it has been made clear due to several events that in some cases full evacuation is not only required but essential to save lives.

The dynamic environment in which this call should be made is challenging to say the least. However, when the call is made the safety of all occupants must be protected.

Design of the initial building is very important, but so are the retrofitting of newer requirements to existing structures. The improvement of both fixed firefighting technology and detection, as well as the improvement in non-combustible building materials are highly important to lower the fire death rate and average loss per fire, as well as to enable safe evacuation.

The traditional concept that elevators should not be used during an emergency has been discarded by the need to ensure faster and effective methods to evacuate tall buildings. In particular, their possible use has been significantly prompted by the issues associated with the evacuation of people with disabilities using stairs.

There are several problems concerning the use of evacuation elevators from a design perspective. The limited space in elevators may create issues related to the crush of the people involved, which may arise in restricted spaces and high density conditions (Harding et al, 2010).

In addition to the above, refuge floors and sky bridges are also egress components that could be considered in design/retrofit. The first provides advantages including the help of those with disabilities, a safe location of rest and command point for fire teams. The second, to provide a horizontal egress means at height between towers, reducing travel distances.

In short, whatever the evacuation strategy (total, phased, delayed) then the effectiveness of the egress components designed into the structure is strongly associated with the building use and the people involved.

The high-rise has been in our communities for millenia and is definitely here to stay. Our forethought in design, construction and operations must be linked together to ensure that when tragedy does occur, we have taken all scenrios into account and that we are prepared to deal with it.

Having spent some time researching this issue I feel that we do lag behind on the engineering and rectification areas that exist. The penchant for us to trust in the standard rather than to think beyond compliance is of concern. Authorities across our region are playing catch-up and they deserve our support and attention to ensure that our communities are safe, no matter at what height we choose to live.