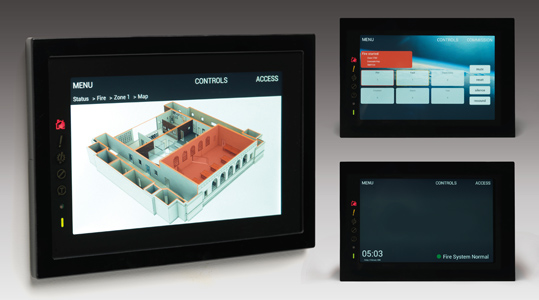 Posted at 10:11h in Features by FME Magazine
Share

Paul Duffy, technical support manager at global fire systems business Advanced, discusses what makes the fire panel business key for specifiers and engineers from today’s basics to the future of the industry.

The humble fire panel is usually the only electronic system that must be installed in a building, the most valuable in life safety terms, and often the most sophisticated.

Put simply, a control panel takes a signal, a simple voltage in the case of a conventional panel, or a much more complicated packet of data in the case of intelligent addressable panels, and uses that information to signal that a device connected to it has detected a valid signal.

Sounds easy? Well, only a few years ago, it was. Panels and devices were much less sophisticated. As the microchip developed, fire industry pioneers followed the computer market by developing ever more sophisticated panels that could offer more logic, alongside easy programming.

The addressable fire panel became a real brain, a computer dedicated to detecting fires and running logic that alerted occupants and helped them evacuate. As standards, building uses and urbanisation have increased, so the demands on the fire panel, and the services it manages have grown.

Today, a panel will work with intelligent detectors to react differently to various fire types. It will report how a fire is spreading, and alert people by voice, light or sound and with multiple tones and frequencies. Evacuation can be phased to more safely get people out of a complicated building, even in a dynamic fire situation. False alarms can be diagnosed and managed in all manner of ways, including by trained occupants, smoke can be managed and fires contained, doors opened and closed, suppressants released, the fire service called, and CCTV trained on the building area on fire. Panels can also link to graphical control stations, building management systems, and the internet for remote control. The list of features and requirements is long, and growing.

Alongside the programmability and power of the fire panel, the key to this vast flexibility is the ability to network panels, linking the brains together to form a network of computers that both deliver enhanced reliability and coverage and increased programmability and flexibility. In real dynamic situations across large complicated sites with multiple risks, the network ensures local and site wide protection and logic simultaneously. The right decisions can be made – often all automatically – by one networked system.

In the hands of a small number of innovating manufacturers, the fire panel has become a life safety super-computer.

All this complexity is no good if things can’t happen fast, because fires often start and spread rapidly. Much worse, sometimes people react slowly and the fire panel needs to handle both, and data is the key. Two areas where this is particularly vital are false alarm management and phased evacuation

Fast data is also key when integrating the fire network with other systems, such as the BMS (Building Management System). This is common, especially on large sites, and can often mean that the fire system becomes a performance management tool. Management teams, particularly in larger buildings, are now far more engaged with the efficiency and environmental performance of the site, so they can use the capabilities of smart fire panels to manage and monitor false alarms, system maintenance and legal compliance, generating reports on everything from incident response times to component faults and erroneous alerts.

The electronics and infrastructure we see in the consumer world have also had a significant impact on the fire panel industry.

Remote management is already an integral part of most modern fire systems and it’s set to become a universal technology as systems are upgraded or replaced, increasingly integrating with mobile devices. Remote monitoring means testing and maintenance become much simpler and cost effective, with the panel working together with smart components (ie. a smart wireless detector or a compatible emergency light) to flag up any faults, testing issues or low batteries. These can then be acted upon immediately, if urgent, or built into the ongoing maintenance schedule reducing admin, time on site and wasted journeys or purchases.

With so much going on away from the panel, you may think its importance has declined, but it is still very much the brains behind the whole operation. Panels can now be programmed and tailored to different installations in ways that simply weren’t possible 10 years ago. They have in-built diagnostic tools, such as voltmeters, to help engineers identify device and installation fault, and even integrated oscilloscopes to aid fault diagnosis, saving time and removing the need for expensive equipment.

Panels designed to EN54 Part 13, such as our own MxPro 5, continually monitor cables and devices to ensure they’ll work in worst case conditions, so that problems such as a poor termination or loose connections can be reported and rectified before they become a problem, saving considerable time and effort over the lifetime of the panel.

The system and event logs compiled by each panel are still the first choice for fault diagnosis. The logs are now far more complex, recording thousands of individual events that can be viewed on a connected PC or even remotely. These provide an audit trail if something goes wrong, or to follow events in a real fire situation. The logs allow fundamental questions to be answered, such as whether the system was operating correctly, had it been properly maintained and tested, which detectors operated and in what order, was there a gradual build-up of smoke, etc.

Much change has occurred on the programming and display of panels with touchscreens, becoming much more important. Manufacturers are adding these as control interfaces on panels and networks.

Touchscreen terminals, like our own TouchControl, allow more information to be presented in new and innovative ways. For example, the larger full-colour screen allows interactive site maps and zone plan capability to be built-in, allowing the user to pinpoint the exact location and spread of a fire incident as well as seeing detailed text and status indicators. Virtual buttons can also be displayed on the screen, so system actions can be initiated in fewer steps.

Other innovations are being driven by legal requirements and standards. In some parts of the US, for example, there is now mandated reporting of carbon monoxide alerts, and the most effective way to deliver this is to integrate sensors with the fire system. There are also new audio standards for the use of 520Hz signalling, which has been identified as the best frequency for waking a sleeping person.

Some manufacturers are making building users a more integral element of the fire system, specifically in the sphere of false alarm management, which can be very costly and disruptive, diverting fire and rescue services away from real fires, and leading to lost productivity, increased maintenance costs and even financial penalties.

Fire panels now incorporate sophisticated false alarm management programming, such as AlarmCalm from Advanced, that introduces a human element into the automated cause and effect processes. Staff or residents can be trained to filter local alarms before a full evacuation is called by indicating whether they believe a local signal is due to a real fire or something like burnt toast or water vapour. This needs to be done within a preset time, using an intelligent alarm acknowledgement device or evacuation will commence.

The Cloud and mobile computing and devices are delivering all manner of features such as allowing fire and rescue services to be guided to fires and receive fire systems information before they arrive on site, being better prepared and ready to act faster.

In terms of the fire panel, this is probably best summed up in terms of integration, the Cloud and the Internet Of Things. At its heart this is delivering more information to those who need it when they need it and to anywhere in the world.

Integration of third party platforms and processes into the fire system, providing a one stop system for a building’s needs, is an increasing requirement. The industry is already integrating paging systems; extinguishant control; fan and damper control; fire audio services; equality act-compliant notification systems and more. There is also a move to integration of all the services a building may need, such as access control, lighting management etc.

Further into the future, faster processors and growing artificial intelligence will take computing and as a result, intelligent fire panels, forward in a new leap. The implications of this are hard to comprehend, especially for current standards regimes. But if you’d trust a computer to drive your car, or diagnose your illness – both are happening now – surely, we’ll be trusting them to manage all sorts of aspects of building safety. It’s worth noting that the standards regimes are conservative for a very good reason, reliable life safety, and that should always be the goal.

What is clear is that the fire panel is going nowhere, as buildings get higher, usage gets more mixed and occupation density increases, the size and scope of fire systems expands exponentially, with more reliance on cause-and-effect programming and robust, high performance processing.