The message is clear: voice is the choice

Home > Features  > The message is clear: voice is the choice

21 Dec The message is clear: voice is the choice

Posted at 13:29h in Features by FME Magazine
Share

With so many different types of audible warning devices, it can be confusing to building occupants when an alarm sounds. Is it the fire alarm? An emergency exit alarm? Or has a unit of production equipment jammed?

To counter these conflicting responses, voice sounders are now an established and effective contribution to voice evacuation systems in large public and commercial buildings, and can be a viable alternative to more complex VA (Voice Alarm) systems. While old fashioned and frankly outmoded fire alarm systems based on bells have not yet been fully replaced, the concept of voice commands to instruct and direct people on how to leave a building or other area during an emergency is widely recognised as the most efficient and sensible way to fulfill an important safety-critical job.

Behaviour in the event of fire

Research has shown that voice alarm messages result in quicker reaction times than when sirens or bells are used, and has resulted in Voice Alarm or VA becoming more commonplace as the primary means of evacuation in public buildings.

Further research shows that people’s behaviour varies dependent on the environment, and in an emergency they may exit the building using the same door they used to enter. The use of a clear voice message greatly increases response time and provides the opportunity to advise occupants of the safest emergency route. 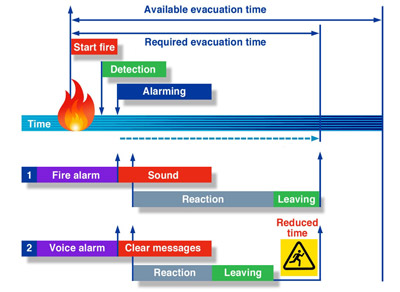 Diagram shows a typical evacuation period example following the start of a fire. It shows how a voice alarm solution compares with a conventional ‘bells & sounder’ based fire alarm to shorten the overall evacuation time.

All voice systems are not equal

It has become too habitual for specifiers to use standards such as BS 5839 Part 8 (Voice Evacuation Systems) and the applicable directives of NFPA 72 as catch-all standards when voice evacuation is a identified as a necessity. In fact, specifying voice sounders for use in a voice evacuation system designed under the auspices of BS 5839 Part 1 can in many instances satisfy the key features of a Part 8 system or NFPA without the cost or complex design process associated with full-blown VA systems.

Much to the disdain of VA system manufacturers, there are many fire systems in the field with more than a hundred voice enhanced sounders on complex systems giving fully synchronised, multi-message announcements in a clear, unambiguous manner.

The message is clear

Arguments against the use of voice sounders are dissolving. With multiple sounder circuit synchronisation, up to seven pre-recorded messages available and with growing ranges of voice sounders constantly being introduced, the message is clear that voice sounders are intelligible, effectively loud enough and can be easily integrated into both new and existing fire alarm systems.

It is important to note that piezo–driven voice sounders do not provide nearly as clear and intelligible messaging as those that use more traditional capsule-driven loudspeakers. This is because a piezo device is designed to maximise output at a pre-determined frequency and not a relatively broad frequency range as in products like, for instance, the Vimpex Fire-Cryer.

It has become too habitual for specifiers to use standards such as BS 5839 Part 8 (Voice Evacuation Systems), and where applicable the directives of NFPA 72, as catch-all standards when voice evacuation is identified as a necessity. In fact, specifying voice sounders for use in a voice evacuation system designed under the directives of BS 5839 Part 1 can in many instances satisfy the key features of a Part 8 system without the cost or complex design process associated with full-blown VA systems.

The first task of any fire alarm design is to agree the evacuation strategy and whether there is any requirement for staged or phased evacuation. Then the designer must ensure agreement with the client and the end user as to the choice of messages and preceding attention-drawing tones to be used in the system.

The choice of messages should be extensive and, with several messages available in a single sounder, a fire alarm system can be expanded to include multiple inputs including bomb alerts; terrorist threats; coded warnings; water leakage alerts; class change announcements; system tests; ‘all clear’announcements; machinery shut down warnings; health and safety reminders; general alert messages and of course ‘fire’ alarm messages.

The potential is huge and with the trend for fire evacuation systems to be used for general evacuation and public safety systems, the use of multi-message voice sounders is set to boom.

Although voice sounders are basically conventional fire alarm sounders that play pre-recorded messages, the sounders need to know what message to play and when. In order to switch from message to message, a switching interface is installed on the sounder circuit. This is interposed between the control panel (or sounder module if on an analogue system) and the rest of the sounder circuit. The bell circuit provides power for the primary or ‘life safety/fire’ message, whilst an auxiliary power supply, sometimes from the panel, sometimes external, powers the switching interface and the extra auxiliary messages. Both sounder circuits and auxiliary power supply must be rated to provide current for all sounders and any strobes on the circuit. Monitoring of the sounder circuits is not affected and the panel’s recommendations on resistance should be maintained.

Most switching interfaces will only provide outputs for two or maybe four sounder circuits.

Should more be required, additional interfaces can be used. Some switching interfaces make the job of extending circuits very simple by providing zone extension cards.

Many voice sounder systems are installed as an interface to an addressable loop, with remote power supplies providing power and addressable I/O units used to switch from message to message. Examples include Rolls Royce at the company’s UK jet and turbine engine manufacturing plant voice sounders have been installed alongside Vimpex Fire-Cryer® twin strobe modules, which differentiate between the general fire/evacuation alarm and the life-critical acid spill/extractor fan failure alarms.

London Underground : Whilst acknowledging the need to alert and warn passengers as soon as possible, there is an imperative to avoid panic. Thus the use of coded messages, as a pre-alarm to staff to take up positions and investigate an alarm immediately without initially alerting passengers, with the instruction to passengers to evacuate the station given within a pre-determined time unless the initial alarm was found as false or malicious and the alarm muted.

Kettering General Hospital is an excellent example of a well-designed system culminating from a non-BS 5839 Part 8 voice specification integrating both multi-message voice sounders and strobes to provide a UK disability discrimination leglislation compliant fire evacuation system. System alert messages give a flashing amber strobe on alert with a bright clear strobe initiated on signalling fire. ‘All clear’ and ‘test’ messages have no flash at all so as not to confuse staff or patients.