21 Dec The changing role of the rescuer

Posted at 14:03h in Features by FME Magazine
Share

By Ian Dunbar, Rescue Consultant at Holmatro and regular contributor to FME. Before joining Holmatro he was a Training Officer in the UK fire & rescue service with a background in both technical as well as medical rescue. Ian provides Consultation & Training to emergency services departments around the world.

I joined the fire and rescue service nearly a quarter of a century ago and since that time the industry has changed beyond all recognition. The only thing I identify with now is the history and tradition that will, quite rightly, be ever present. Everything else is radically different and the industry has not just evolved but has revolutionised itself during this time. This has been a global transformation with seemingly no service untouched.

At the heart of this revolution, without doubt, is the ever changing role of the rescuer and the expectations placed upon them. A complete change of focus has seen reactive ‘brigades’ turn into proactive ‘services’ with the emphasis on prevention rather than cure. In many parts of the world this has equated to a dramatic reduction in the number of operational incidents that require a response. Over the same period however, rescuers have had to become more adept at dealing with a wider range of incidents than ever before. At the same time they have to develop their core skills to deal with the ‘usual’ types of incidents associated with their role. So whether it is the ability to react to ‘contemporary’ issues such as the ruthless forces of nature, terrorism or the challenges presented by new construction in buildings and vehicles, the operational landscape has changed forever.

More advanced skills and tools
One of the first things I had to do as part of my basic training as a firefighter in 1992 was to be able to name, locate and describe every item of equipment on the rescue vehicle. This was quite an achievement; or so I thought. Fast forward to 2015 this is now a far more daunting task. Not only is there far more equipment to find and to list, but it is also far more technologically advanced and less ‘agricultural’ in its design and construction.

The same time period has also witnessed a huge change in the construction of vehicles from which people have to be rescued, while the basic extrication techniques haven’t massively changed. So rescuers have had to refine their skills to face up to the newer more challenging vehicles. Thankfully, the latest generation of hydraulic rescue equipment provides the rescuer with everything they need in order to overcome this in a safe, effective and timely manner. It is fair to say that both our rescue tools and our skills have advanced further and more rapidly than vehicles, allowing the rescuer to stay ahead of the game. 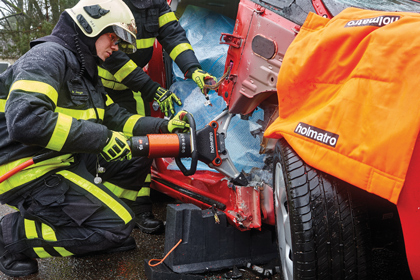 How to make the right choice
There has never been so much choice when it comes to hydraulic rescue equipment, with each tool performing a different role in rescue operations. In an effort to make things clearer, let’s take a closer look at what is available and what is used popularly across the world.

The first choice comes with deciding a power source. It is generally a straight shootout between a pump-hose-tool configuration and self-contained equipment, which can be either powered by a battery or by the operator’s hand. The pump-hose-tool configuration may be a portable pump with hoses (personal power) or a fixed pump on a vehicle with hose reels that can be deployed at the scene directly from the vehicle. Each configuration allows for dedicated tools (cutter, spreader and ram) and will offer the rescuer a different set of options on scene. It is simply a case of weighing up the perceived operational pros and cons that are associated with each set configuration.

The most important thing to consider is application. Who is using the equipment, what are they using it for and in what kind of conditions? Also consider your requirements for specialist applications such as rapid intervention. There is no right and wrong answer here; it is all about the needs of the user.

Now let us look at individual tools, their principal use and how they can be configured into a rescue set. There is no ideal rescue set composition as this depends on the nature of the required need of the user. The majority of rescue sets are sources for light vehicle rescue (i.e. cars and smaller vehicles). When looking at the composition of a set it is important to remember the overall weight as this may have an impact on the vehicle.

Heavy rescue tool set
Heavy rescue operation often involves working at height, access can be difficult and we very often have restricted space to work in. So the working environment should be considered along with our desire for larger heavier tools. Heavy rescue very often comprises:

*For heavy rescue, tools with a larger capacity (than for light vehicle rescue) are often favoured.

Another tool to consider is the:

This is a tool which provides capacity for cutting and spreading and is often used for rapid intervention  (initial attendance at a road traffic collision, often to gain access and initially stabilise the patient). The combi tool is also the tool of choice for other ‘specialist’ application due to its relative small size, light weight nature and operational flexibility.

Vehicle extrication and beyond

We have already discussed that the role of the rescuer has expanded and, as a consequence, the use of hydraulic rescue equipment has broadened. The ability to use hydraulics to cut, spread, squeeze or lift is now also well established in other disciplines such as urban search and rescue, mine rescue and specialist operations within the Special Forces around the world. For this reason, some of the most popular rescue tools have migrated into this field of operations and likewise some specialist equipment that has been designed for niche markets is now used routinely by rescuers worldwide.

Tools such as power wedges are now commonly used for assisting entry as well as assisting with the initial stages of lifting. Hydraulic struts can be used for a wide range of applications from the stabilising of small vehicles to lifting trucks to providing emergency shoring for rescue from collapsed buildings or trenches. Small combi tools are not only used at the side of the road, but also by Special Forces who routinely jump out of aircrafts.

Suffice to say that the once defined lines between tools, their operators and applications are now very blurred with a whole host of equipment available to all agencies.

But from an equipment point of view, there has never been a better time to be an operational rescuer, of course that is providing you still don’t have to name, locate and describe every item of equipment on the rescue vehicle!