Posted at 10:39h in Features by FME Magazine
Share

The autostore storage system is developed by the Norwegian company Autstore A/S (previously Jakob Hatteland Logistics A/S) and is a fully automated small parts storage system that efficiently picks and stores single items and small cases in plastic bins with robots at the top of the grid to collect the required bins and present them at integrated picking stations. The plastic bins used for the storage measures 650 mm by 450 mm and the bins have an external height of either 220 mm or 330 mm. As the bins are stockpiled in the cells, the maximum storage height is limited by their mechanical strength. At most, 24 bins smaller type bins or 16 larger type bins can be stored on top of each other, which equals a maximum storage height of 5280 mm.

The AutoStore system offers a high storage density, a high flexibility and is easy to integrate into existing warehouses. It may be installed inside facilities with low ceilings, as a low clearance is required above the top of the storage system. A sprinkler system concept has previously been developed for such facilities however, when installed in new or integrated into existing warehouses with a higher ceiling, the high clearance from the top of the storage system to the ceiling require high performance ESFR sprinklers.

In April 2016, two ESFR sprinkler system pre tests were conducted at RISE. The AutoStore bins were filled with the cartoned unexpanded Group A plastic commodity, which consist of empty plastic cups in compartmented cartons. The water flow rates of the sprinklers were based on the design recommendations in Table 5 of FM Global Property Loss Prevention Data Sheets 8-9, “Storage of Class 1, 2, 3, 4 and Plastic Commodities”, dated June 2015, utilising a 9.0 m ceiling height. This resulted in a clearance of 3.7 m measured from the top of the topmost bin to the ceiling. One test was conducted with a K14.0 (K200) sprinkler and one test with a K22.4 (K320) sprinkler, under as equal test conditions as possible. For both tests, the point of fire ignition was positioned directly below the sprinkler. As a conservative approach, the sprinkler was installed at, or almost at, the maximum permitted vertical distance from the thermal element of the sprinkler to the ceiling.

For both tests, the fire was suppressed but not completely extinguished. However, a small residual fire was not discovered until the grid was dismantled in Test 2. In Test 1, fire re growth was observed when the water supply to the sprinkler was terminated. Figure 1 shows the fire size at the activation of the sprinkler in Test 2.

The results of the tests were strong indicators that the design recommendations in Table 5 of FM Global D S 8-9 are valid for the protection of AutoStore storage system. However, test data at higher ceiling heights were required to provide additional evidence that this was the case.

As a direct result of the pre tests, four large-scale ESFR sprinkler verification tests were conducted at Underwriters Laboratories, Inc., in March 2017. The objective of the tests was to verify that the design recommendations in Table 5 of FM Global D S 8-9 are valid for the protection of the AutoStore system over the full spectrum of ceiling heights in the design table. In order to confirm this, tests were conducted at different ceiling heights covered by the design table. As a conservative approach, the sprinkler options of the design table that typically provided the least water discharge density was selected.

The AutoStore bins were filled with the cartoned unexpanded Group A plastic commodity. All cells of the array was filled with bins, however, the cell directly under the robot was only filled with six bins. This mimics a situation where the robot is unloading bins and provides a more rapid fire growth rate as compared to a completely full array. The following acceptance criteria was established prior the tests; (1) No more than 8 sprinklers are allowed to operate, as per the requirement of UL 1767, (2) the maximum one minute average ceiling steel temperature shall not exceed 540°C, as per the requirement of UL 1767 and UL 199, and (3) no fire ignition, as detected by burn through or severely warped bins on the inner faces of the stacks of bins surrounding the center 5 by 6 cells is allowed.

The fire test parameters and results are summarized in Table 1.

Final extinguishment was achieved by fire fighters that directed hose streams directly into the burnt openings in the array from above using scissors type and boom lift equipment which allowed them to get above the burning test array. AFFF firefighting foam was used to allow better penetration of the water into the obstructed burning surfaces. For tests 2, 4 and 5 the test array needed to be manually dismantled from the side of the array to get water to the seat of the remaining fire. 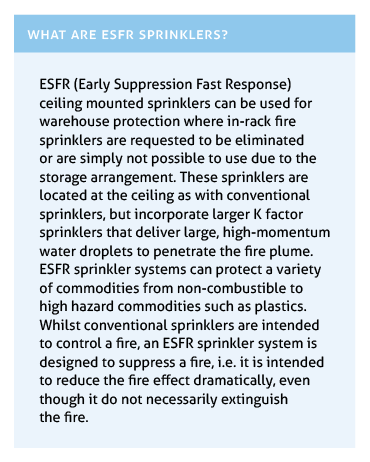 The original article was published by RISE in Brandposten No.57.