Risks must be mitigated

Home > Features  > Risks must be mitigated

26 Dec Risks must be mitigated

Posted at 16:27h in Features by FME Magazine
Share 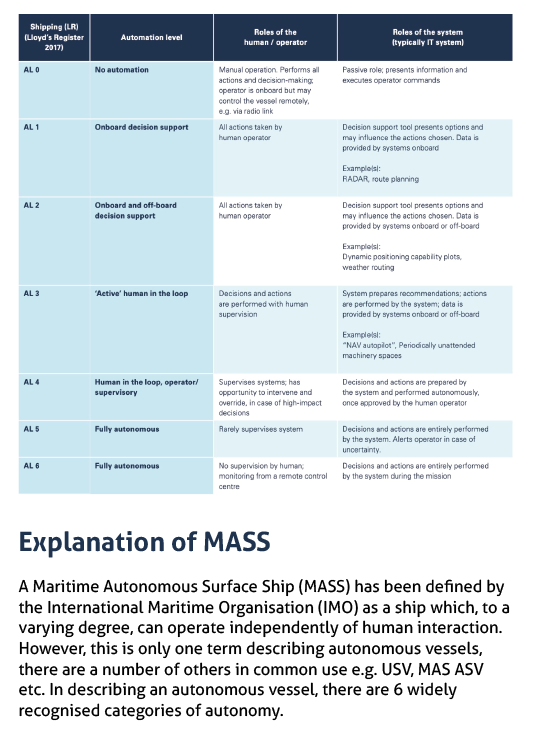 Currently there are over 1000 non-military autonomous maritime craft in operation globally. Almost all are under 24 metres length in order to benefit from less stringent maritime legislative requirements, many are under 10 metres. Whilst a substantial number are to be found in hydrographic duties, ocean research, oil and mineral exploration, marine pest eradication and ancillary craft for large super-yachts are amongst many areas of operation.

Globally, there are many significant development schemes in various stages of evolution within the commercial environment for larger vessels, both remotely controlled and fully autonomous. These include ship towage tugs, offshore supply and service craft for the offshore energy sectors, inland waterway cargo vessels, river and harbour ferries, as well as more ambitious projects investigating coastal and ultimately international trade routes.

Where projects are developing within national legislative boundaries then changes to legislation can be enacted to facilitate the required operations by the regulatory bodies. Concerned. However, where national boundaries are crossed then changes to internationally agreed regulations may be required. This latter case will inevitably temper the speed of larger MASS evolution. Indeed, it is generally accepted within maritime circles that fully autonomous commercially viable ocean crossing vessels will probably be secondary to the significant expansion in the increased use of autonomous systems on board manned vessels.

Whatever the outcome of MASS developments, of paramount importance, acknowledged by all stakeholders,
is the safety of the vessels both navigationally but also with regard to their impact on third parties, littoral and riparian communities, port infrastructures etc. Not only with regard to collisions and impacts which may lead to injuries, fatalities, material damage and pollution but also to the uncontrolled release of toxic gasses and vapours along with fire and resulting combustion products.

Dealing with fire risks onboard MASS, at Remote Control Centres (RCC) and potential effects on third parties is a major issue for MASS developers. Commonly recognised ignition sources via materials, fuels and heat generators need to be closely scrutinised but also trying to identify and mitigate against unlikely circumstances needs to be considered at the design and construction stages.

Fire on board any seagoing vessel is a major issue. Where autonomous vessels are concerned though new challenges are presented. Inevitably the craft will be operated at distance from shore based or mother ship support and unlike the situation on manned ships, objective incident assessments leading to specific immediate response and where necessary enhanced, strategic fire-fighting measures may not be possible.

Technology will need to play a far greater role; not only in the greater attention to and use of non-flammable materials but in sophisticated detection and extinguishing systems coupled with significant operating system design redundancy of critical operational elements. The MASS will need to default to a failsafe operating condition – which may include a navigational status – in the event of a fire.

RCC issues – fire at the RCC

Similar challenges will be faced and overcome within Remote Control centres ashore / onboard mother ships. This may be a simple as a secondary, back-up control centre at a different location that can be changed over to in the event of an incident or it may involve greater attention to the design and construction of the RCC facility itself.

Regulations and Codes of Practice

Inevitably, regulation lags behind most technological evolution and development. The same prevails within the maritime autonomy sector. Where craft operate purely within national waters then regulatory authorities may implement unique regulations to cover such operations. Where however vessels are intended to operate outside national boundaries in international or foreign waters then the situation is complex and currently the focus of much investigation and debate within national and international fora. Primarily this is dealt with at the International Maritime Organisation (IMO), the specialised agency responsible for improving maritime safety and preventing polution from ships – the UN agency. The situation becomes even more complex for larger vessels, those generally in excess of 24m length but other size parameters also apply. The regulations are primarily navigational but construction and operational regulations are also under scrutiny.

The complex standards of construction and maintenance of ships are overseen by “Classification Societies, these are commercial organisations that work primarily with insurance underwriters etc. In very simple terms through a comprehensive catalogue of obligatory inspection and maintenance regimes agreed at a global level, the day-to-day sea-worthiness of ships is ensured. The evolution of un-crewed vessels has presented new challenges to “class” requiring authoritative guidance for construction and operations. Class associations have risen to the challenge and there are now a number of guidance standards and documents published. For example the DNVGL “Autonomous and remotely operated ships” guidance https://bit.ly/2VUjWb9 which contains fire safety related advice specific to autonomous vessels.

In the UK, vessels under 24m in length are covered by the MCA Workboat code https://bit.ly/3qER5pe. Its comprehensive content includes requirements for fire safety and fire appliances. Whilst it was not written and updated with MASS in mind, currently small <24m autonomous craft in commercial use are expected to comply with its provisions as appropriate.

A number of organisations have created guidance and recommendations, amongst them a respected global leader is the Maritime UK – Maritime Autonomous Surface Ships (MASS) UK Industry Conduct Principles and Code of Practice. https://bit.ly/3m7XR4b

The 4th edition (2020) was recently published. Within its pages are numerous references concerning fire protection, detection and extinguishing aspects to be considered in the design and operation of autonomous craft. For example:

7.8.1 Where fire safety systems are required, they should be designed to detect and extinguish a fire with a level of integrity sufficient to enable the MASS to be operated and maintained safely and to protect the MASS in all RFOC [Reasonably Foreseeable Operating Conditions].

Even a minor fire within a critical on board system can have serious implications not only for the vessel itself but perhaps more importantly for those around it. A loss of control (remote or autonomous) could potentially result in a collision or grounding.

It is not inconceivable that there will be logistical issues in facilitating external firefighting assistance as is often (though not always) available to conventional shipping. Another aspect to consider is that on a conventional ship, firefighting can potentially be a dynamic and organic process where is one approach is not initially successful, there may be opportunities to try something else. Such an approach is unlikely to be available in an autonomous vessel.

If the fire is not extinguished by the internal systems then there may be risks associated with the combustion of nearby ships or installations if the vessel on fire approaches too close or worse makes direct physical contact. The types and nature of the third parties that may be exposed to this are extensive and may range from heavily populated water-side structures residential or commercial to industrial trading and processing facilities to be found in any port large or small. The risk is not limited to port areas though. With the increasing use and development of autonomous vessels in the offshore energy sector, the implications of a “rogue” vessel which is on fire within an energy generation field is easy to imagine.

It is therefore imperative that fire prevention, detection and extinguishing systems on board all types and sizes of autonomous craft are given the highest priority in their design, construction and operation.