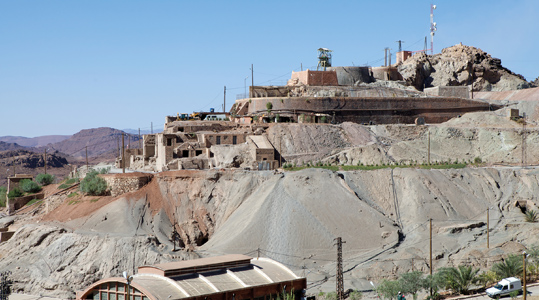 Posted at 10:02h in Features by FME Magazine
Share

In the short term suppliers of fire safety equipment to the mining and ore processing industries in the Middle East could see their markets grow.

Analysts are forecasting a huge expansion in the extraction of underground resources in Iran and Saudi Arabia over the next five years while Turkey and Morocco are both hoping to boost their national economies with increased production from their existing mining industries.

However, while Iran possesses huge untapped deposits of zinc, copper, iron, uranium and lead and is ranked among the top 15 mineral rich countries in the world by the global business analysts BMI Research, several huge hurdles will still have to be cleared before they can be fully exploited.

BMI analysists believe that while Iran can now begin to commercially exploit underground reserves which hold around 68 different types of minerals weighing 57 billion tonnes and worth an estimated US$ 770 billion the progress will be slow.

In a report BMI have said: “ In the next three to five years, the removal of Western sanctions will accelerate the growth of Iran’s mining sector, containing vast underdeveloped reserves still dominated by state-owned companies.

“However, progress will be slow and we expect the sector to face major challenges in the next two-to-three years, ranging from the country’s inadequate infrastructure to low mineral prices.”

“Given huge infrastructure deficits and other major obstacles, the economy will not undergo a boom – rather a steady acceleration in GDP growth limited to around 5-6% on average over the coming years.”

The pattern of predicted mining growth in Saudi Arabia contrasts with Iran’s because the government in Jeddah has recently taken a big step towards increasing the country’s
mining output.

The state-owned Technical and Vocational Training Corporation (TVTC) is working with the Saudi Arabian Mining Company “Ma’aden” to provide youngsters in Saudi Arabia with training in the field of mining.

And the scheme they have already begun to implement aims to increase the number of jobs in the sector to 90,000 by 2020 which would  raise mining’s  contribution to the Saudi GDP to SR97 billion.

The Corporation is currently working on processing eight new technical institutes in various Saudi cities and in partnership with the private sector should soon bring the total number of trainees to 13,400.

Saudi Arabia does remain the world’s largest petroleum producer however reports have suggested that the prospect of US shale gas eating into its dominance of the energy export market has highlighted a need for it to diversify its economy. Having already established itself as a leader in the global gold production market, the kingdom has now set its sights on obtaining a sizeable slice of the copper, zinc and phosphate markets as well, with all three resources in plentiful supply both underground and under the sea.

The most mature and lucrative sector of the Saudi mining industry is gold with the Mahd Ad Dahab mine producing the lion’s share. First mined over 3,000 years ago, the site, located near the centre of the Arabian Shield, is estimated to have already produced over one million ounces of gold and is currently producing 100,000oz a year.

In addition to gold, Ma’aden extracts around 900 tons of copper 4,000 tons of zinc and 280,000oz of silver from the mine each year and a spokesman for the mine said: “Our phosphate deposits have the potential to make Saudi Arabia one of the top five
global producers.”

While the current site has a limited lifetime, Ma’aden has identified a number of nearby locations that could grow. One of them Bulgah, 65km to the south-west, is said to have having 30 million tons of deposits and is already delivering at a rate of one gram of gold per ton.

Predicting a period of growth for the mining industry in Turkey is currently clouded by political uncertainty which has posed challenges to the investment climate. However BMI analysts still think new entrants could be encouraged into the industry other significant events last year.

BMI reported : “In April 2016, indigenous miner Alacer Gold received approval from Turkish authorities to begin operations at the Copler gold mine which will allow for the construction of the sulfide proceeding plant at the mine, as well supporting infrastructure, and a tailings storage facility.

In August 2016 the European Bank for Reconstruction and Development (ERBD) announced a USD75mn loan for the development of Centerra Gold’s Oksut open-pit gold mine in Turkey. We forecast the value of Turkey’s mining sector to grow from an estimated US$9.5bn in 2016 to US$11.7bn in 2020, on the back of greater gold, coal and base metal production.”

The Oxford Business Group has reported that while mining is a key sector of the Moroccan economy, for a long time it has just been based on the extraction of phosphates with the country already listed among the globe’s three largest producers. Recently, however, there has been a push to improve performance in the sector, in part by encouraging upstream and downstream activity in a variety of metals and minerals.

Three years ago the Moroccan  government rolled out a comprehensive strategy for the mining sector aimed at boosting investment and expanding capacity, as well as introduce a new mining code. Foreign investment in the sector had been fairly constrained by comparison to other industries, and the new code aimed to offer a package of incentives to boost extraction and exports.

Aligned with the new code has been the development of a comprehensive geological map of Morocco compiled at a cost of US$1.3 million.

1.3 million is central to this, and in 2013 four new surveys were carried out at a cost of Dh15m (€1.3m). This figure is only a fraction of the amount larger producers such as South Africa spent on geological surveys and mapping during the same period.

The Oxford Business Group has predicted: “While the mining sector in Morocco has focused on phosphates, efforts aim to include more minerals and metals. New regulations will also expand maximum prospection permit areas, ensuring the sector is not as reliant on just a few large players.”