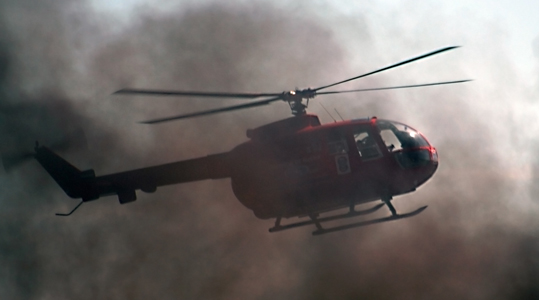 Posted at 14:13h in Features by FME Magazine
Share

Search & Rescue is a misnomer when relating it to Unmanned Aerial Vehicle as, in reality, it can currently only perform the Search role – not the Rescue nor Recovery – yet. So really its Search & Rescue mission should be described as Search and Locate. Unless, of course, one day they drone an amphibious aircraft which could also pick up disaster survivors or, at least deliver life rafts, water and medical packs. This makes the mind boggle, writes Ben Drew, Head of Programmes, Tangent Link Limited, organisers of Search & Rescue 2017 in France.

In short-to-medium range Search & Rescue (SAR) missions, Unmanned Aerial Vehicles (UAVs) are a force multiplier and enabler by replacing the helicopter pilot and crew who, according to the US Coastguard, spend 99% of their mission in search mode and 1% in Rescue and/or Recovery mode. In the case of helicopter SAR, the search mission can be fatiguing. By deploying a UAV first the pilots and crew are completely fresh to perform the rescue mission. The UAV can also benefit the fixed wing SAR pilot by apportioning the more hazardous or difficult parts of the mission to a drone, enabling the pilot to cover a particular search area more effectively.

UAV manufacturers are constantly looking for new revenue streams to gain more commercial customers. As their UAV technologies continue to improve, so does the likelihood that unmanned systems will prove instrumental in locating downed aircraft, sinking ships and capsized yachts in Ultra Long Range Search and Rescue in remote parts of the world’s oceans.

Deployed in numbers these drones can scan vast tracts of sea for missing aircraft or vessels. When swarmed – where multiple UAV systems are programmed and deployed in different search patterns and staggered formations – they can also potentially save precious search time, costly manned aircraft fuel, and crew from hazardous weather conditions.

New morphing technologies emerging from industry will permit UAVs to fly in all weather conditions by adjusting their shape while in flight. This technology promises the advantages of being able to fly multiple missions in all weathers and be more fuel efficient.

Better scanning capabilities over water is allowing easier and more accurate target identification against the ocean’s ever changing surface. Fitted with high-resolution cameras, IR and thermal imaging, datalinks and other sensors, UAVs can cover vast tracts of ocean. Should they come upon mariners in distress, the location can be marked and realtime video information relayed to coastguard vessels or command and control aircraft in the area. Coastguard ships and helicopters capable of carrying rescue swimmers or delivering life-saving equipment can be vectored to the disaster scene more efficiently.

But in the southern hemisphere this can be a daunting prospect considering 80% of the area is covered by water. Both the Air France AF-447 and Malaysian Airlines MH-370 crashes occurred in this region.

There are some extraordinarily capable UAVs which fit the Ultra Long Range SAR role waiting patiently in the wings for a requirement from a single or group of nations who see their cost vs operational benefits but all of them need runways to deploy at the moment.

UAVs will, one day, be a significant Search and Rescue asset and a force multiplier to the satellite and long-range maritime patrol piloted aircraft.  Finding disaster sites doesn’t necessarily mean rescuers will reach them in time to save the afflicted, but locating them early enough in the search will give those survivors just a bit more chance of surviving the ordeal.